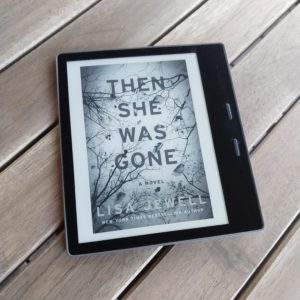 Then She Was Gone
by Lisa Jewell

Ellie Mack disappeared when she was a teenager. Ten years later, Ellie’s mother, Laurel, is on her way to healing after this great loss. Laurel has always thought there were unanswered questions about her daughter’s disappearance, but she is ready to move on a grieve her loss. Then Laurel meets a man who has a 9-year-old daughter that bears a striking resemblance to her missing daughter, and those unanswered questions arise again.

Told from multiple points of view and different timelines. The main point of view is from Laurel, but we also hear from a few other characters. The timeline is “then” and “now.” The “then” parts were from when Ellie went missing, and the “now” parts were ten years after her disappearance.

Well developed characters and plot. I enjoyed the story, but never really connected to any of the characters.

An intriguing psychological thriller that was creepy and heartbreaking.

I received a copy of this book from Atria Books and Netgalley in exchange for an honest review. Then She Was Gone is expected to be published in April 2018.