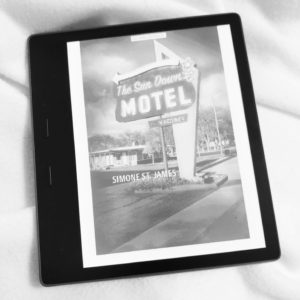 Something hasn’t been right at the roadside Sun Down Motel for a very long time, and Carly Kirk is about to find out why in this chilling new novel from the USA Today bestselling and award-winning author of The Broken Girls.

Upstate New York, 1982. Viv Delaney wants to move to New York City, and to help pay for it she takes a job as the night clerk at the Sun Down Motel in Fell, New York. But something isnʼt right at the motel, something haunting and scary.

Upstate New York, 2017. Carly Kirk has never been able to let go of the story of her aunt Viv, who mysteriously disappeared from the Sun Down before she was born. She decides to move to Fell and visit the motel, where she quickly learns that nothing has changed since 1982. And she soon finds herself ensnared in the same mysteries that claimed her aunt.

In Fell, New York, the Sun Down Motel is a rundown motel where strange things happen. In 1982, Viv was the night clerk at the Sun Down Motel. One night she simply disappeared. In 2017, Carly is curious what happened to her aunt Viv in 1982, so she goes to Fell to retrace Viv’s steps. Not much has changed since 1982, and Carly is faced with the same mysteries as her aunt.

Told with alternating points of view (Viv and Carly) and alternating timelines (1982 and 2017). Viv is a young woman wanting to get away from her family in 1982. She makes it as far as Fell, and ends up with a job as a motel night clerk. While there, she is intrigued with several local murders, and starts to investigate. Carly has always wondered what happened to her aunt Viv. While looking for answers, Carly’s steps are eerily similar to her aunt’s.

An absorbing and atmospheric paranormal mystery. The characters are captivating. The setting is haunting. The story is gripping. An excellent read that I highly recommend

I received a digital copy of this book from the publisher via Edelweiss in exchange for an honest review.

2 thoughts on “Book Review: The Sun Down Motel by Simone St. James”

Enjoying the fire pit and catching up on some read

Hey y'all! I hope everyone is doing well and stayi

Evening plans. Catching up on reading. 😍📖 .